Breaking down the barriers of homophobia

It's just the way it is, everyone does it, it's part of the game...

This position assumes that “faggot” and “homo” shouted over the boundary or as part of on-field sledging, is and always has been a part of sports’ warfare . . . “You’re just doing whatever you can to hurt your opponent”.

The justification is that it ‘isn’t personal’ - it is just about getting into the other player’s head and putting them off. Anything goes between the start and finish whistles or sirens . . . “If you’re not up for it, don’t play or don’t come to game”.

The problem with this position is that all of those people who are gay, lesbian or transsexual (watching or playing) hear comments like these being used as a form of abuse, a put down, as something perverse or bad and ugly. It tells them that something is fundamentally wrong with their identity and they do not belong – that they’re ‘not right’.

When homophobia is allowed to exist as standard practice in something as mainstream and everyday as sport, it marginalizes gay people, particularly young people. It says ‘you have no place here’. It is hard not see this as being personal.

Considering the high youth suicide rates among young Australian gay people, anything that contributes to young people feeling they are unwelcome, even hated, needs to be seriously addressed. Sport should be a leveler not a divider – it belongs to all of us.

Many sports have now made it unacceptable to vilify on the basis of sexual orientation, or to scream homophobic abuse over the fence at the elite level. They have done the same in relation to racial, gender and disability-based vilification. This change will help to create a ‘new normal’ at all levels of the sport.

It doesn't really hurt or affect anyone, it's not even a problem...

This position assumes that there are no gay players in sport so why talk about it? There are thought to be no significant issues around homophobia within the sport, and at the end of the day, the administrators are interested in what is happening within their sport first and foremost. So what’s the big deal?

At community level, the experience of athletes like Yarra Glen Australian Rules player Jason Ball, who came out and experienced overwhelming support, has strengthened the argument that there is no issue. Some hold the view that it wouldn’t be a problem if a player came out in the AFL – his mates would look after him and it would be old news within weeks. Who cares?

But the reality is, the AFL did not choose to take action on racism or the NRL did not choose to focus on respect towards women without serious issues being highlighted that needed to be addressed in both elite games. Player misconduct on both counts was the catalyst. They didn’t do it to be the good guys of sport. In hindsight, it has been good for their brands, but that isn’t why they acted – they did so because they had to. It seems that the issue of ‘homophobia’ has not presented a grave ‘need to’ response in sport yet.

So why doesn’t it happen? Why doesn’t someone come out? Is it possible there are no gay players and never will be? Despite the fact that many athletes will self-select out of male team sports if they are gay because they do not wish to be revealed or under pressure to hide their identity, it is nonsense to presume that our major sporting codes never have, don’t or won’t involve gay players.

The fact is, many gay people don’t want to ‘bang the rainbow drum’ and just want to get on with life without their sexual identity being forefront. They don’t want to be an advocate, social rights campaigner or known as a crusader, even when they are openly gay. And the reality is that anyone who does speak out is going to be front page news. Clubs think of it as a distraction from their game and players think of it as high personal risk for themselves and their club.

However, until there are more people who are willing to say, ‘hey, we probably need to move on homophobia’, within and outside of sport, the issue will continue to be seen as irrelevant. In the absence of conversation – even a conversation that dispels myths and stereotypes - there is seen to be no need for action. This same apathy used to exist for racism in sport – until there was a catalyst for change.

If we wait for a pioneer, we are also waiting for a problem. There needs to be collective effort from all - now.

The issue is so relevant because homophobia is deeply harmful to the mental health and social well-being of gay people - it’s as simple as that. If this number is around 10% of our population, or 1-2 players in every team, then shouldn’t it be very relevant?

The ‘It’s not our responsibility’ position

We are not here to fix the issues of the world, we don't want that stuff forced upon us...

This is the ‘why should sport solve the problems of the world’ position. Any view of the AFL, for example, as an organisation oriented towards social justice is a retrospective view formed after the game has done well on addressing racism and sexual violence against women. Rights agendas are a long way from vilification policies though. If footy is a community organisation, its community offering is sport, not social justice.

There is also a resistance from the spectator or fan that says ‘I take my 8 year old to the game and I do not want to have to talk to him or her about gay sex because there is a No To Homophobia ad on the big screen. The reality is that homophobia is not a discussion about sex; it is a conversation about rights, and respectful relationships, and about family and love. It is about being valued and respected and judged on your character, being given a fair-go, being allowed to live without hiding and shame and self hatred. It is about being able to be at your best and having the same rights as anybody else in the stands or on the field. Aren’t these something every parent would want for their 8 year old or 18 year old?

Clearly the major sporting codes in Australia have a responsibility around vilification based on homophobia within their games and they are acting on that responsibility. Further to this, as monoliths in Australian sport, they have opportunities that other smaller sports don’t. They are game changers. Beyond what is required, they should be looking at what is possible.

Pippa Grange is a Director at Bluestone Edge and former General Manager, culture and leadership, with the AFL Players Association 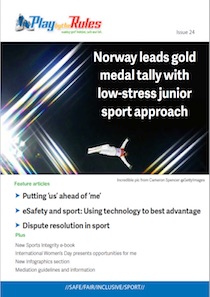